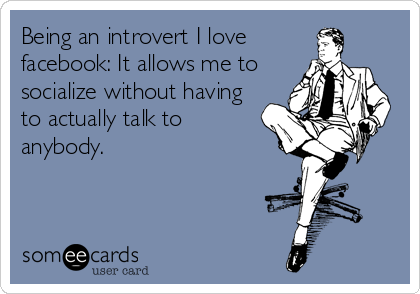 For years, I have described myself as an extrovert. As a child, I had a lot of friends, that I spent time with. I participated, as often as I could in group or public functions, including student or community government, school dances or clubbing, and stage shows or entertaining others. I’ve had sales and marketing businesses. I’ve worked in public relations that had me hobnobbing with public officials, giving public speeches, and giving radio and television interviews. Until my 40’s, my life was full of exciting encounters and putting myself out there. Until a few years ago, I would have considered myself outgoing.

I don’t know exactly when that all changed, but I have a pretty good idea. The last time that I did a live radio interview, a few years ago, and I admitted to the interviewer that I value my alone time and prefer to play hermit on days when I’m not required to be anywhere, I was a little offended when he, jokingly, said to me, “Admit it, you hate people!” How could I hate people? I have been outgoing since I was able to walk. I can’t possibly be accused of hating people. But, he was right.

It’s not that I “hate” people. It’s just that, I realized, not too long ago, that I have lived so much of my life to please others and to try and make and keep friends, that I rarely did the things that I really wanted to do. I was afraid that people wouldn’t like me if I said “no” to doing this thing or that thing. I thought that it made me a bad person not to be as outgoing as was expected of me.

When I slid into my 40’s, I had just recently been divorced and my karaoke business finally fizzled out. That’s when all of my so-called friends disappeared. These were friends whom I had partied with and cried with, brought chicken soup to, and babysat their kids or even gave them deep discounts from my businesses. Some of them shoved a knife in my back, as they vanished. Others vanished when they knew they couldn’t get freebies or discounts by hanging out with me, anymore. I literally looked up, one day, and all my friends were gone. They stopped returning my phone calls or texts or made excuses for why they couldn’t be there for me, despite me having been there for them. At first, I was heartbroken. Then I realized how at peace my life was without them in it.

I am constantly evaluating my life, trying to find ways to improve myself; to make my life better. I’ve tried making new friends, but lately it seems that I’m still making the wrong friends. It’s just easier to be alone. Or, at least, make friendly acquaintances with people who expect nothing more than conversation, rather than commitments.

It might surprise people to learn that I still work with the public. I love working in customer service. I love the satisfaction that I get from meeting people’s needs and putting a smile on their face when they are pleased with the outcome. I work for a small business with very few employees, so I work alone most of the time. That is the thing that I love most about my job. I can get a lot done with limited interruptions. Of course, there is the down-side of having a busy day with more customers than usual. Those days I usually leave work tired and cranky.

Although, I look on my old life with fondness, I don’t miss it. It was chaotic and always so busy. I had people, including young children, that relied on me being “ON”, all of the time. Thankfully, the children are teenagers now and can fend for themselves. My partner, like my children, gets my attention, but nobody (at home) requires me to be “Superwoman”, so I don’t have to pretend to want to do things that I loathe, unless I absolutely have to, which, thankfully, is extremely rare.

to be honest, I prefer, what I call, “The Facebook Life”. It goes back to what I was saying about friendships, earlier. I like having friendly acquaintances for conversation, but I don’t have to commit to being places I don’t want to be or doing things I don’t want to do, just for the sake of friendship. When family comes around, from out of town, I do what is expected, whether i want to or not, but family is almost always the exception. Because. Family.

Continuing to evaluate myself, always asking myself, “why is that I hate going to the movies, among crowds, even if it means never seeing a movie while it’s still new?” or “I miss dancing, why is it that I can’t just pull myself together and go out to the club, once in a while?” I did enjoy doing those things, once upon a time. What made me stop? Listening to one of my favorite youtubers, I got my answer. It’s not that I “hate people”, it’s that I hate having to interact with people unless I absolutely have to. Going out, in public, means that I have to interact with people, whether I know them or not, whether I like them or not. At work, it’s different, because, at least, I’m getting paid to deal with people whom I don’t like. And, at work, there is generally the same people coming in, day in and day out, so I pretty much know what to expect. I’m in charge, when I’m at work, so I have the upper-hand. I have to pretend to like people that I don’t, but it pays the bills, so I can justify the play-acting. I don’t like having to do that, the rest of the time, but why is that?

I grew up in an extremely abusive environment. the children in our family were not allowed to express themselves, no matter how much we wanted, in fact, needed, to speak up. If we did, we were punished, either physically, emotionally, or aesthetically. I learned that I was expected to act happy when I was miserable. I learned that my needs were unimportant so long as the adults in my life were pleased. Until my 40s, in adult relationships, I learned that I was expected to cater to the needs of others, even if it meant, outright, hurting myself. I called it “compromise”, back then, but entering this new stage of my life, I now realize that it was, more often than not, “bull-crap”. I was raised to be a doormat. A friendly, supportive, outgoing doormat. When I hit my 40s, I decided to retire that life.

I’m an introvert and I’m okay with that.

I love having time to myself, to write, to learn, to crochet, to craft, to play games, or write songs, to sing, to play my guitar, to sit in silence, to watch Netflix, to sleep; to do whatever the heck I want to do and to not apologize for it.

L like having the power to say, “No, (I won’t come to your thing, if there will be lots of people there, I will be uncomfortable and it will not be as fun for me as you claim it will be. I’d rather chat, one on one with you, over coffee, where it’s quiet, with few interruptions).”

I like spending my spare time, at home, with my partner and my children, talking for hours about everything under the sun, gossiping about people we don’t like, watching hours of streaming television, playing silly games, or doing our own thing, but in the same space, in silence.

I like not having to be so much in the public eye that I have to have fake friends to keep up appearances. I like that I don’t have to participate in activities that I loathe to keep those same fake friends happy.

I like my “Facebook life” because I can make new friends, with people all over the world, but I never have to leave my house to meet them online, be it twitter or Facebook or whatever. We can talk about all the topics that I’m interested in and I can learn about things that I never knew or teach them about things that I know. We can support each other, in our pajamas. Not speaking can mean that I have been blocked or unfollowed/unfriended, but usually it means that they are off doing other things and not relying on me to entertain them when they are bored (I’m not a substitute for some other friend, they’d rather be with. I like that online friendships tend to be a lot less competitive than IRL ones). If I do find that I’m being used or the relationship gets abusive in some way (one of these days I’ll tell you a story about when I was catfished by some women in yahoo groups, who tried to rip me and my group members off, ages ago), then I can walk away and generally (YMMV) never worry about having any contact with that person, ever again, not even in passing (no worries about running into this person while running errands, like I still do with friends from my old life). It is still sad, sometimes, but making a clean break from people who don’t bring peace into my life, no matter where the friendship existed, is something that took me a long time to get comfortable with, so I have no regrets.

I used to be an extrovert and lived a very interesting life. But, I’m over it.

I’m an introvert and that’s okay.